SEC says much to be done to protect crypto investors

Despite global wheat prices trading at record highs for the time of year, market participants may have been too optimistic on the supply outlook for the upcoming year if the U.S. government’s new projections are any indication.

The U.S. Department of Agriculture on Thursday pegged world wheat ending stocks for the 2022-23 marketing year at 267 million tons, a six-year low, well below analyst estimates of 272 million.

But relative to estimated global demand, wheat supplies for the upcoming cycle are seen dangerously close to all-time lows and notably below this year’s reduced levels.

USDA’s Thursday estimates were its first for the 2022-23 cycle. 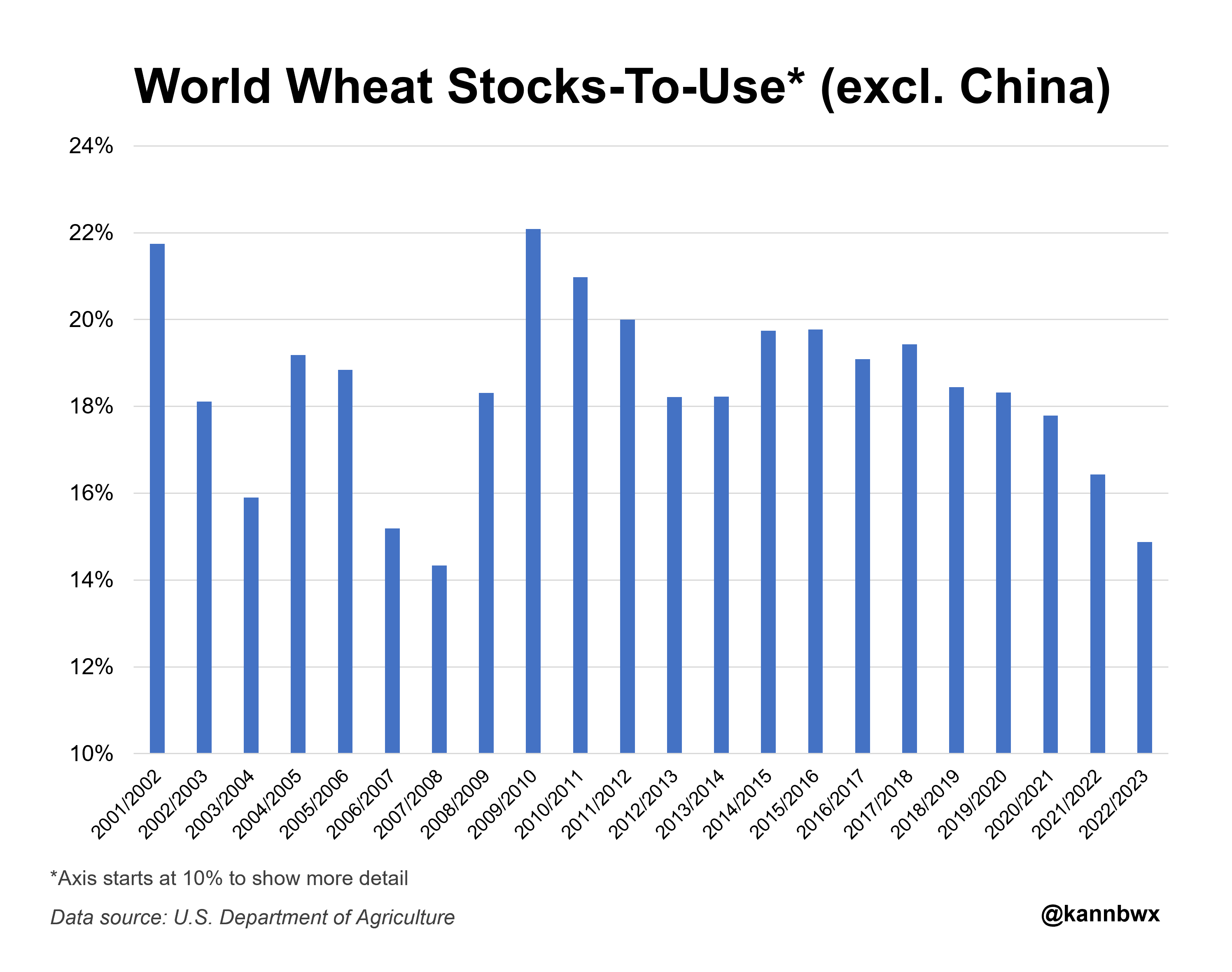 One of the most surprising forecasts on Thursday was U.S. hard red winter wheat production from USDA’s statistics service at 590 million bushels. Analysts were expecting 685 million, already far off last year’s 749 million. It would be the United States’ smallest HRW harvest since 1963.

Condition ratings in U.S. HRW states are terrible, among the worst ever, though history indicates that USDA’s prediction could be reasonable. In the last decade, USDA’s May HRW forecast was substantially closer on average to the final in poor-yielding years than in strong ones.

But the U.S. spring wheat crop is of major concern and could limit the country’s output. As of Sunday, the planting pace was the slowest since 2011 and top producer North Dakota had sown just 8% of the crop versus 37% average. More rains this week may have worsened delays.

Ukraine’s situation also brings great uncertainty to the wheat market as Russian military still occupies parts of the country, normally a top five exporter. USDA pegged Ukraine’s 2022-23 wheat harvest, which was planted last fall, at 21.5 million tons, a 10-year low and down 35% on the year.

Ukraine’s wheat exports were pegged at just 10 million tons, down 47% on the year and a nine-year low.

Top wheat exporter Russia’s crop is forecast to rise more than 6% on the year, but USDA predicts smaller 2022-23 crops in major suppliers Argentina, Australia, India and the European Union by a collective 4%. Unfavorable weather in France and India could pressure volumes there.

Canada’s wheat harvest is set to rebound 50% from last year’s drought-stricken catastrophe, though the planting pace and dry conditions are being eyed by analysts. USDA shows the total U.S. crop rising 5% on the year, but that is completely driven by tentative spring wheat assumptions.

China, which is often excluded from global grain analyses due to its stockpiling habit, is slated to have a record 53% of the world’s wheat in storage by mid-2023.

Karen Braun is a market analyst for Reuters. Views expressed above are her own.