WASHINGTON - The U.S. Justice Department said on Friday six people have been indicted by a grand jury in Washington state with conspiring to...
Read more
Money

Playboy explores deal to return to the stock market

By Joshua Franklin and Mike Spector Playboy magazine owner Playboy Enterprises is exploring options that include going public through a merger with a blank-check acquisition...
Read more
Money

Corporate debt frenzy rolls on as worries loom over markets

By Kate Duguid NEW YORK - Investors are gearing up for the year's record-breaking pace of corporate bond issuance to continue in the coming week,...
Read more
Money

EU to introduce crypto-assets regime by 2024

By Huw Jones LONDON - The European Union will introduce new rules within four years to make cross-border payments quicker and cheaper through the use...
Read more
Money

U.S. details up to $14 billion in new aid for farmers

CHICAGO - The U.S. Agriculture Department on Friday announced details of a second round of COVID-19 aid for farmers, which will pay up to...
Read more
Money

U.S. lawmakers negotiating a fresh dose of stimulus have reached an impasse.

Trillions of dollars injected by the Federal Reserve and huge government spending increases have stemmed coronavirus-linked economic damage, fueling a rebound in a Citi index that tracks economic data relative to expectations.

But with almost 30 million Americans unemployed and coronavirus still spreading, Fed policymakers have been warning the recovery could sputter unless politicians come through with further measures. The S&P500 index is holding just off record highs. The wait is on to see if negotiations resume and bear fruit. 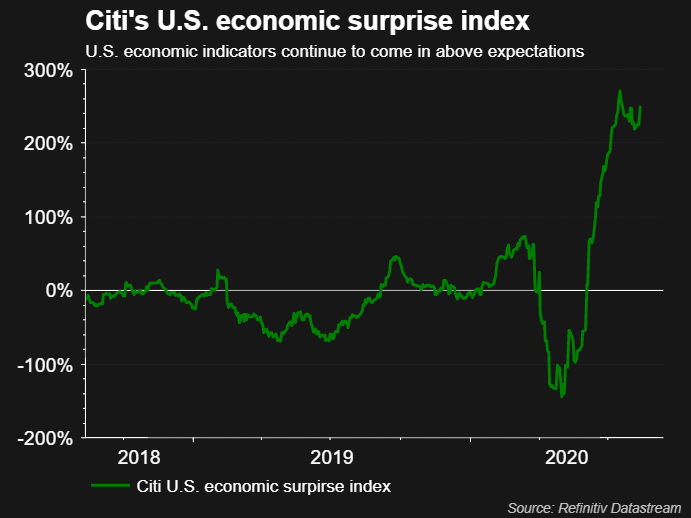 The twin troubles of Brexit and coronavirus ensured Britain’s second-quarter contraction of 20.4% was greater than any other major economy’s. And recovery will be elusive unless a free-trade deal is reached with the European Union before the post-Brexit transition period ends on Dec. 31.

EU-UK talks begin on Aug 17. The two sides remain far apart, but the meetings may show if they can lay aside their differences in time to reach a deal by the Oct. 2 deadline. An impasse may spell trouble for sterling and further pressure on domestic-focused shares.

The Bank of England is not considering negative interest rates just yet, but the prospect of crashing out of the European Union without a deal might leave it with no alternative. 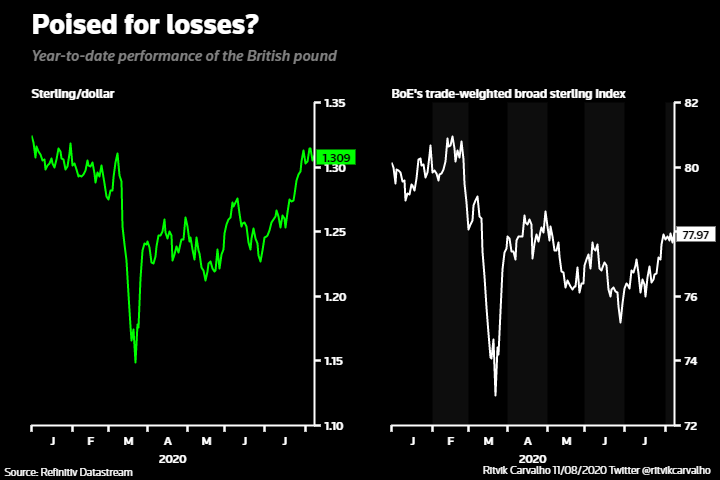 The dollar’s 5% plunge in five weeks has got gold bugs excited. Prices for the metal vaulted to a record above $2,000 per ounce before retreating as the greenback regained some poise.

Dollar weakness could run further — it remains strong across various trade-weighted indexes. But correlations between gold and the dollar, tenuous at best, have weakened under the impact of central bank stimulus, with 90-day correlations approaching cyclical lows.

Finally, rising inflation expectations boost hedges such as gold. Refinitiv data shows U.S., UK, German and Japanese 10-year real, inflation-adjusted yields in negative territory, a first for all of them simultaneously. So even if gold struggles above $2,000, gold bugs can probably rest assured a big selloff isn’t imminent. 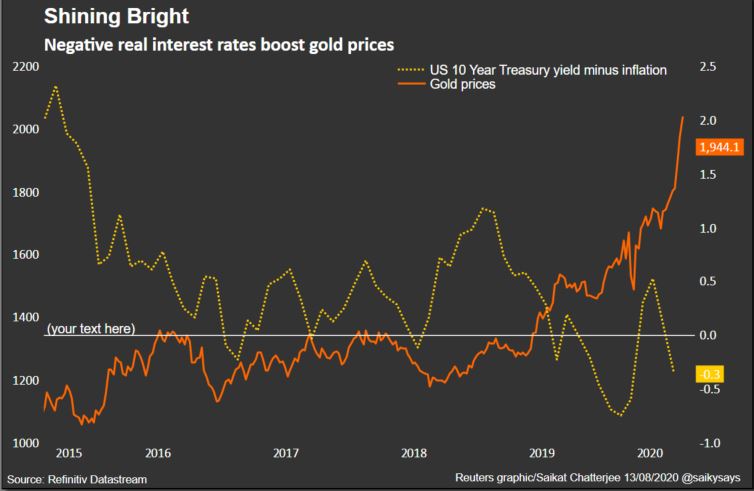 Apple and Tesla’s stock-split announcements rekindle memories of the dotcom bubble, when companies were actively dividing shares into multiple new ones. That trend eventually died — is it making a comeback?

Tesla is giving out five shares for each share held; Apple has a four-for-one offer. Companies typically split shares to make them cheaper for retail investors, but these days, with platforms already offering fractional shares for as little as $1, such splits don’t attract investors in droves. Shares have risen since the announcements, but it remains to be seen whether gains continue until Aug. 31, when trading starts on a split-adjusted basis for both Apple and Tesla.

The world’s biggest listed mining company and the third-biggest digger of iron ore, Australia’s BHP, reports annual results on Tuesday. With iron ore prices soaring and rival Rio Tinto beating forecasts, strong numbers are expected of BHP. But BHP is more than just a miner — steel is a bellwether for economic growth and its main ingredient, iron ore, sits at a critical juncture. Many question whether Chinese demand is enough to offset crumbling orders elsewhere.

BHP is also a gauge of China’s economic health. After July shipments to China from the world’s largest export hub, Australia’s Port Hedland, dipped 17.5% from June, investors will be listening out for management’s view on the outlook. 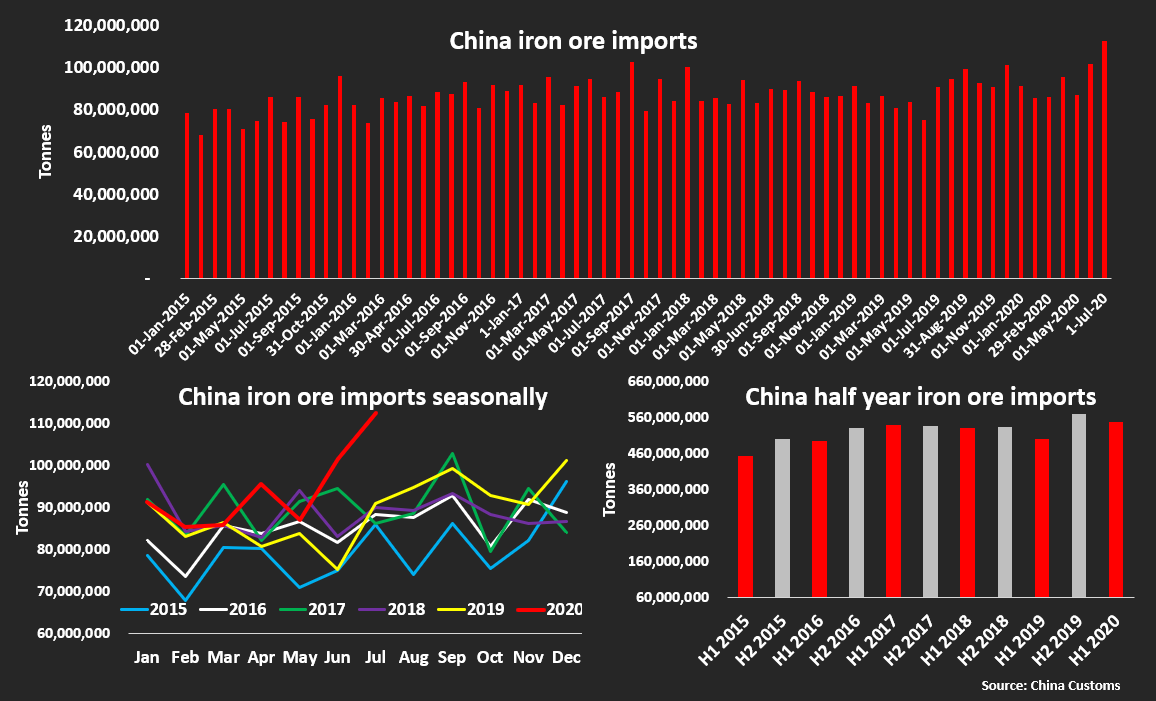 WASHINGTON - The U.S. Justice Department said on Friday six people have been indicted by a grand jury in Washington state with conspiring to...
Read more
US News

Biden says Ginsburg’s replacement should be chosen by election victor

NEW CASTLE, Del. - Democratic presidential nominee Joe Biden said on Friday that "there is no doubt" that the next U.S. Supreme Court justice...
Read more
US News

WASHINGTON - The death of Justice Ruth Bader Ginsburg on Friday will enable U.S. President Donald Trump to nominate a third jurist to the...
Read more
US News

How Trump could replace Ruth Bader Ginsburg on Supreme Court, even before election

Two people were killed and 14 others wounded in a shooting in Rochester, New York, police said on Saturday. The shooting appeared to start at...
Read more

How Trump could replace Ruth Bader Ginsburg on Supreme Court, even before election

A look at the 43 competitive races in the U.S. House of Representatives

By Simon Lewis WASHINGTON - The death of Supreme Court Justice Ruth Bader Ginsburg on Friday has set off a fierce political battle over her...
Read more
Politics

WASHINGTON - Justice Ruth Bader Ginsburg, a stalwart liberal on the U.S. Supreme Court since 1993, died on Friday at age 87, the court...
Read more