U.S. election volatility may be an opportunity to buy emerging markets

By Noel Randewich and Saqib Iqbal Ahmed The Trump rally, a trade war, and then a crippling pandemic: The four years since President Donald Trump's...
Read more
Money

By Lucia Mutikani The U.S. economy grew at an unrivaled pace in the third quarter as the government poured out more than $3 trillion worth...
Read more
Money

With 3 consecutive months of record economic growth behind us, the road ahead may still be rocky

U.S. businesses splurge on insurance to protect against post-election chaos

By Suzanne Barlyn Retailers, pharmacies, liquor stores and other merchants across the United States are gobbling up insurance that protects buildings from damage caused by...
Read more
Money

Gauges for implied currency swings in the $6.6 trillion a day foreign exchange markets jumped to their highest levels in nearly seven months on...
Read more
Money

Toyota Motor Corp said Wednesday it is recalling another 1.52 million U.S. vehicles for a fuel pump issue that prompted an earlier recall in...
Read more
Money

Detroit automakers keep masks on to keep the factories running

By Joseph White When the coronavirus pandemic slammed the United States in March, the Detroit Three automakers shut their plants and brought their North American...
Read more
Money

By Aaron Saldanha and Divya Chowdhury

“U.S. elections are typically a volatile time for emerging markets, and so we expect some good opportunities to top up this year,” said Bentley, whose firm prefers to assess political impact on company earnings over hedging event-risk. 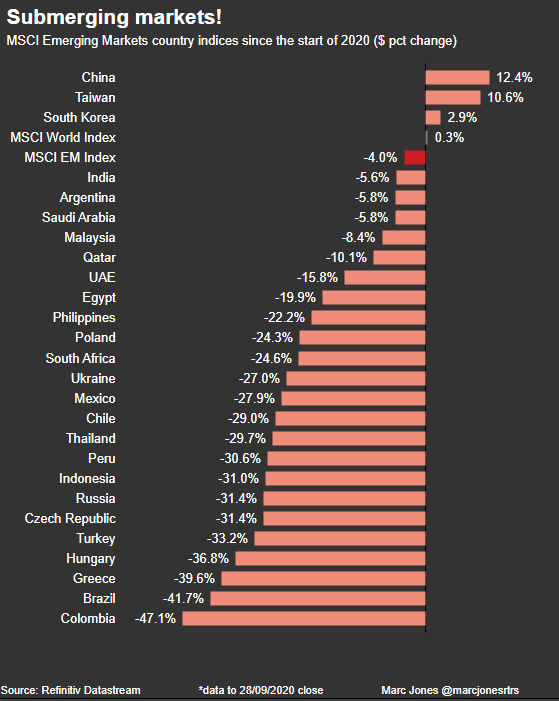 Bentley expects U.S.-China relations to improve after the Nov. 3 election, which he said will drive the dollar lower. <.DXY>

“We see a weaker dollar and progress on a COVID-19 vaccine as positives for emerging markets.”

The dollar <=USD> lost 3% in the third quarter, which will be its worst since mid-2017, but it gained 3% in the month of September. 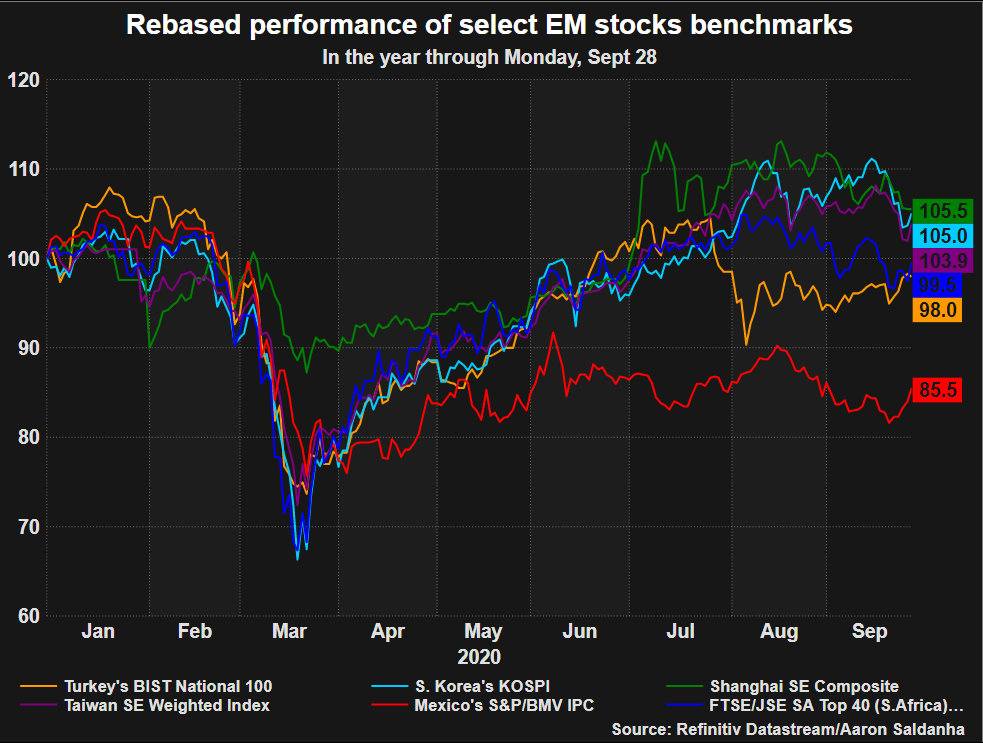 South Korea, which has the second-largest weighting in Eastspring’s portfolio at about 15%, presents opportunities across sectors, Bentley said.

China, to which Eastspring has allocated 35% of its portfolio, provides “stock-specific opportunities outside expensive e-commerce,” he said.

It has raised its investments in South Africa, “where investors may tend to overlook (opportunities) given the unfavorable news headlines”, he said.

It is now looking to buy more Indian stocks too.

“We have been underweight (on India) outside a few interesting financial and IT names. But recent weakness has put a few names on our radar.”

(Reporting by Aaron Saldanha in Gurugram and Divya Chowdhury in Mumbai; Editing by Susan Fenton)

Coronavirus and the great workplace debate

By John Kemp Decisions on where and how to work are embodied in trillions of dollars of investment worldwide, including the siting of commercial and...
Read more
Money

By Noel Randewich and Saqib Iqbal Ahmed The Trump rally, a trade war, and then a crippling pandemic: The four years since President Donald Trump's...
Read more
US News

By Christopher Bing The FBI is investigating the recent targeting with ransomware of more than two dozen hospitals across the United States by a sophisticated...
Read more
Health

Thousands of German police plan to hunt for lockdown violators

Germany plans to deploy thousands of federal police officers across the country to enforce toughened coronavirus restrictions from Monday, including the closure of restaurants...
Read more
Money

By Lucia Mutikani The U.S. economy grew at an unrivaled pace in the third quarter as the government poured out more than $3 trillion worth...
Read more

So what if Biden is up in the polls? Weren’t they wrong last time?

How the early vote surge is shaping Trump and Biden endgames

Thousands of German police plan to hunt for lockdown violators

By Jonathan Allen and Joseph Ax Even as the presidential election dominates the country's attention, Democrats have spent record-breaking sums this year on winning seats...
Read more