By Fransiska Nangoy and Bernadette Christina JAKARTA - Indonesian Sofa Arbiyanto had a manufacturing job in South Korea two years ago when he learned about...
Read more
Money

By Liz Hampton On July 7, the board of directors at Texas fracking sand supplier Hi-Crush granted nearly $3 million in bonuses to four top...
Read more
Money

By Mark Miller CHICAGO - What happens to Social Security if we eliminate its funding? That is the question to ask after Donald Trump signed a...
Read more
Money

The slowdown in economic activity is likely to continue as states put more restrictions in place to control the virus, and the momentum to...
Read more
Money

From carats to peanuts: how a pandemic upended the global diamond industry

By Yoruk Bahceli AMSTERDAM - Universities, waiting to see how hard the coronavirus pandemic will hit overseas enrolments and government grants, have gone on a...
Read more
Money

By Chuck Mikolajczak and Sinéad Carew

NEW YORK – After a rally led by growth companies that has left the S&P 500 index <.SPX> roughly 4% from setting a new record high, the window of opportunity for value stocks to take leadership on Wall Street, as has often happened in the past, may be closing.

The benchmark index plunged more than 33% from its Feb. 19 high to its low on March 23 as coronavirus-related shutdowns began spreading across world economies. As restrictions eased, and the Federal Reserve pumped trillions into stabilizing markets, many stocks have stormed back, lifting the S&P 500 more than 45% as economic activity slowly returned.

Over the past decade, a focus on growth and momentum has steadily outperformed stock picking based on how undervalued a stock looks. More recently, the Russell 1000 growth <.RLG> index has risen 53% from the market low on March 23 versus the 37% gain in the Russell 1000 value <.RLV> index. 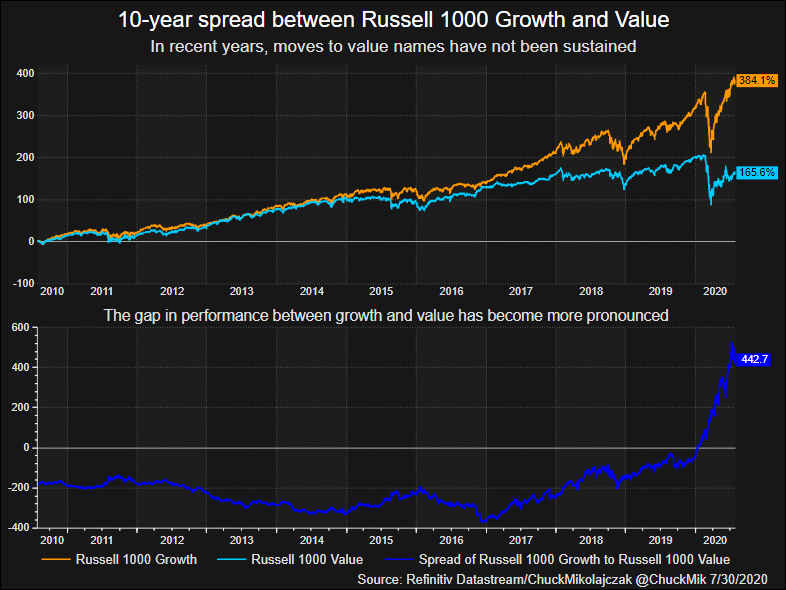 The value investment style tends to do better as an economy recovers from a recession, and while some analysts are still looking for a sharp economic recovery, expectations are mixed as to how quickly the economy can bounce back from the lockdowns put in place across the country to stall the spread of the novel coronavirus.

Recent data on the economy and the latest policy statement from the Federal Reserve offered a dim view on the prospect of a quick recovery.

“It is virtually impossible for value to start to get sponsorship unless and until we have a better answer on economic growth,” said Art Hogan, chief market strategist at National Securities in New York.

“So you are never going to see a value sector, value company, value investor shine unless the projection for economic growth significantly improves and we don’t really have that necessarily this year.”

The Commerce Department said on Thursday that gross domestic product collapsed at a 32.9% annualized rate, the steepest decline in output since the government began to keep records in 1947, while weekly initial jobless claims increased to 1.434 million. On Wednesday, Fed Chair Jerome Powell said the recent surge in coronavirus cases is starting to drag on economic activity.

“You can’t dial up a worse situation for value stocks than the biggest collapse ever in a quarter in the post-war history of the United States. That’s got to be the worst possible environment for value stocks,” said Jim Paulsen, chief investment strategist at The Leuthold Group in Minneapolis.

But in a note to clients on Wednesday, Savita Subramanian, Bank of America Merrill Lynch’s head of U.S. equity and quantitative strategy, pointed out that the relative valuation between growth and value has become increasingly stretched, and the firm prefers value stocks for at least the next few months. 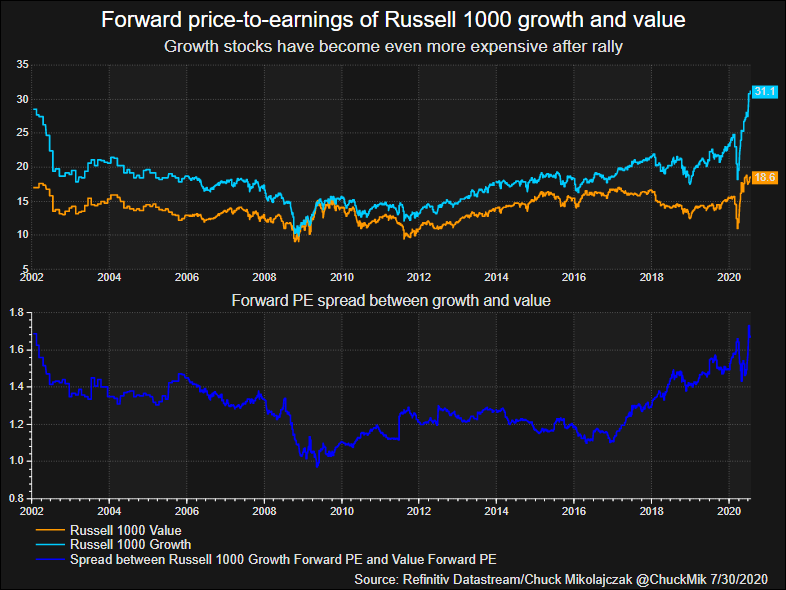 Subramanian does caution, however, that value traps remain in areas such as brick-and-mortar retail names and energy.

Some cyclical stocks, many of which fall into the value bucket, have already outperformed since the March low. The S&P materials sector <.SPLRCM> is up 57%, energy <.SPNY> is up 52% and industrials <.SPLRCI> are up nearly 48% to outpace the broad S&P 500’s 45% run off the low.

Andrew Slimmon, portfolio manager at Morgan Stanley Investment Management in Chicago, also thinks the time may be right to start looking at value if the economy is poised to rebound next year.

Comparing the performance of the equal-weighted S&P 500 index <.SPXEW>, which gives a fixed relevance to each component and, as such, does not discount beaten-down stocks in value, to the market-cap weighted benchmark S&P 500, Slimmon notes the equal-weighted index historically outperforms as the economy exits a recession. 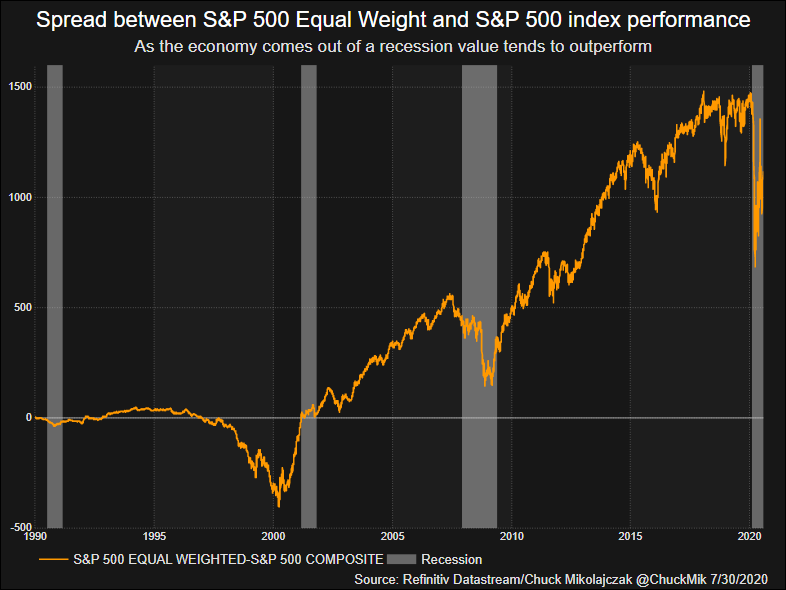 “We haven’t seen that yet and I think we will, in fits and starts,” Slimmon said.

“There is this short-term rotational set up, which is we could have a value rally because they are oversold, growth stocks are overbought.”

But ultimately, any hope for a strong economic rebound, and in turn, a rally in value stocks is likely to be predicated on an end to the COVID-19 pandemic.

“It coalesces around economic growth but it doesn’t take much of an imagination to think what would drive that and what would change that, and a lot of that has to do with getting to the other side of this vaccine race,” Hogan said.

By Fransiska Nangoy and Bernadette Christina JAKARTA - Indonesian Sofa Arbiyanto had a manufacturing job in South Korea two years ago when he learned about...
Read more
Money

By Liz Hampton On July 7, the board of directors at Texas fracking sand supplier Hi-Crush granted nearly $3 million in bonuses to four top...
Read more
US News

By Kanishka Singh Twitter said late on Wednesday it plans to expand its rules censoring misinformation regarding mail-in ballots and early voting in the U.S....
Read more

Why Kamala Harris may prove an elusive target for Trump