New year but old themes will weigh heavily on the dollar

In another action against China days before he leaves office, U.S. President Donald Trump on Friday directed government departments to look at ways to...
Read more
Money

The U.S. Treasury Department on Friday began distributing $15 billion in new payroll assistance to airlines approved by Congress under similar conditions to an...
Read more
Money

Investors push for social media controls ahead of U.S. inauguration

When to trade bitcoin? When Saturn crosses Mercury, of course

Bitcoin seems so flighty, some might argue you may as well consult a crystal ball, read the runes or stare at the stars to...
Read more
Money

European stocks slipped from over 10-month highs on Monday as investors booked profits after a strong week, while surging coronavirus cases across the continent...
Read more
Money

The dollar’s weakening trend will last at least another year, longer than previously expected, according to a majority of foreign exchange strategists polled by Reuters who cited a hunt for yields in emerging market currencies as the main reason.

After posting its first annual loss since 2017 last year – dropping around 7% – the dollar index has weakened as much as 1% since the new year. While on brief occasions the dollar has shown resilience, it has failed to sustain that as the factors underpinning its rally for years have largely abated.

The greenback has been pushed to multi-year lows by rock-bottom U.S. interest rates, massive budget and trade deficits, and expectations that rebounding world trade after a successful coronavirus vaccine rollout would drive non-dollar currencies higher.

That downward course of the dollar was expected to continue this year, according to the Jan. 4-7 poll of 70 strategists.

“We think the dollar is over-valued. We’re at the point where that relative yield advantage is gone. So, you have to ask yourself, how far can the dollar fall and why can’t it fall further when rates are about the same?,” said Gavin Friend, senior market strategist at National Australia Bank. 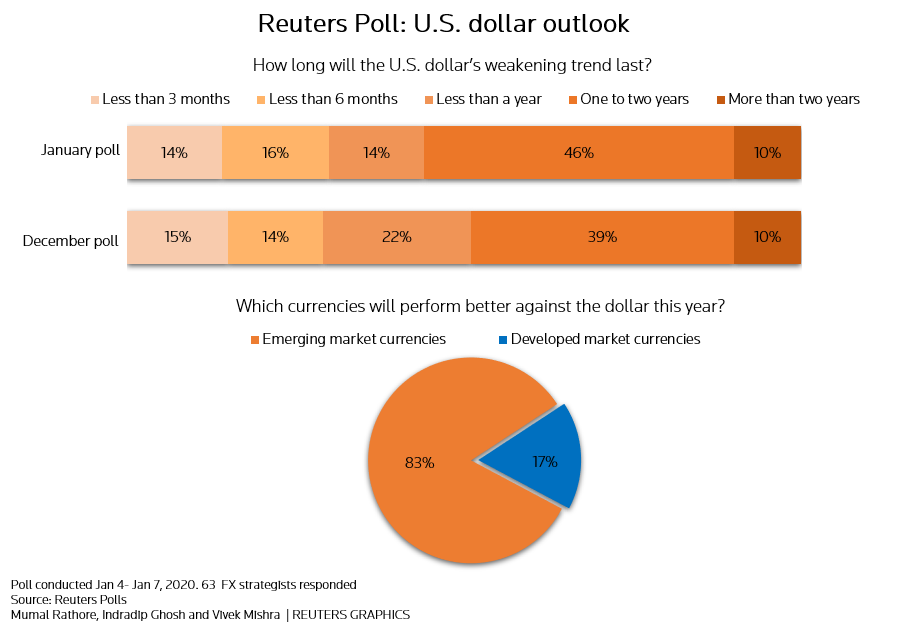 Currency speculators increased their bets against the dollar for the 40th week in a row, according to the latest positioning data, and 35 of 63 analysts – or around 55% – predicted the dollar’s weakening trend would last more than a year.

The others expected it to end sometime before the end of 2021. That compared with a slim majority of analysts predicting the trend would end within a year in the December poll.

Much of that dim outlook for the greenback was down to investors chasing riskier assets, both within and outside the United States in search of better returns.

The blistering global stocks rally that propelled the benchmark S&P 500 index to rise more than 70% from its March depths and pushed the dollar down was anticipated to continue as analysts expect global capital to favor more volatile currencies.

A clear majority, or 47 of 57, analysts said in response to a separate question that emerging market currencies would perform better against the dollar this year. The other 10 chose developed market currencies.

“We are going to have movement into emerging markets looking for higher yields and out of the dollar,” said Jane Foley, head of FX strategy at Rabobank.

“The dollar could remain soft during the first half of the year, but for the second half there is the possibility that could have changed, although it is equally possible right now it could be 2022 before we get that adjustment.”

Despite expectations that they would underperform against emerging market currencies, most major developed market currencies were predicted to post marginal gains against the greenback over the next 12 months.

The euro, which accounts for nearly 60% of the dollar basket, was forecast to gain around 1.9% to $1.25 by the end of this year. The common currency, which gained almost 9% last year and is up nearly 0.5% so far this year, was changing hands around $1.227 on Thursday.

Among the majors, only the safe-haven Swiss franc was forecast to weaken against the dollar, losing around 1.0%.

But not everyone was convinced about unabated dollar weakness.

A few analysts expected the continued spike in COVID-19 cases caused by a new strain of the coronavirus to unravel some of the heavy bets against the dollar.

“The dollar is moving in the right direction. The issue now is that it has definitely done more than you would have wanted it to in recent months in terms of the speed,” said Kit Juckes, head of FX strategy at Societe Generale.

“You can already see some push-back… I wouldn’t be surprised if the dollar weakening stalls at some point.”

What will Congress do now that Trump has been impeached a second time?

Join Wolf Daily Today!
Get the most important breaking news, straight to your inbox. Sign up for FREE and begin receiving our members only exclusive daily newsletter.
Give it a try, you can unsubscribe anytime.

Don't Be Censored, Get our Newsletter