By Kate Duguid The Federal Reserve's $3 trillion bid to stave off an economic crisis in the wake of the coronavirus outbreak is fueling excesses...
Read more
Money

By Jonnelle Marte U.S. consumers are more optimistic that the worst of the economic crisis sparked by the coronavirus pandemic is behind them, but are...
Read more
Money

LONDON – From a January lockdown in a Chinese province to 10 million infections worldwide, the coronavirus’ march across the globe has buffeted markets at every step these past six months, roiling the very plumbing of the global financial system.

The following charts aim to capture some of the milestones.

On Jan. 21, there were reports of a “flu-like” virus in China and soon after the city of Wuhan closed urban transport and suspended outgoing flights.

By Jan. 27, the World Health Organisation declared an emergency in China, hitting the yuan and Chinese equities. 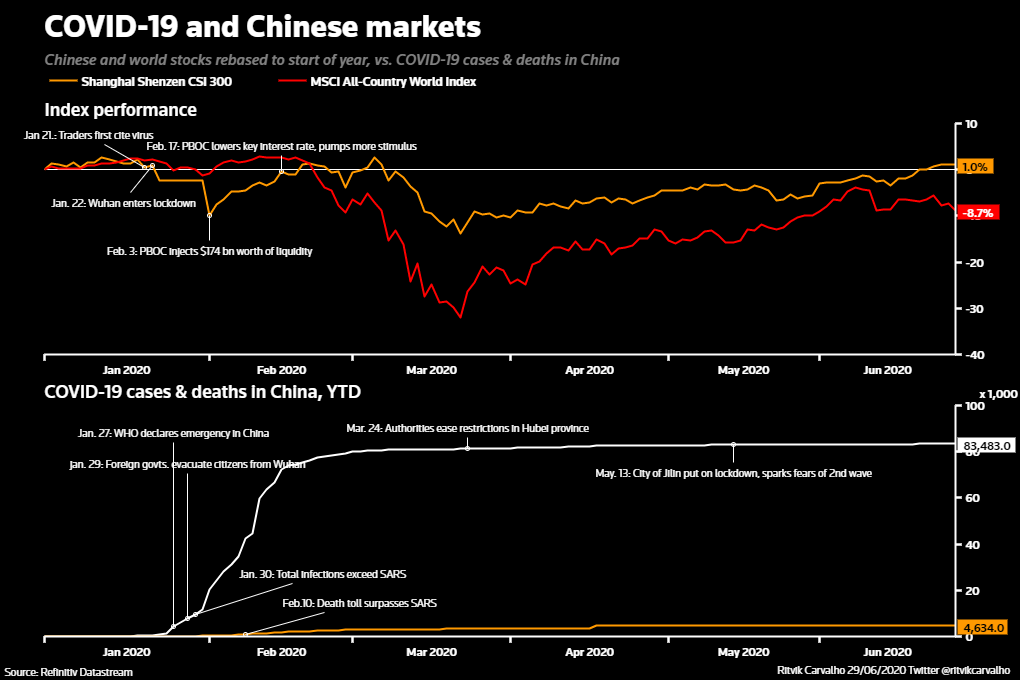 On Feb. 3, China’s central bank stepped up with a $174 billion liquidity injection, the first of many such actions worldwide. On Feb. 17, it cut interest rates and infused more cash into the system.

In early April, Wuhan started to ease its lockdown.

On Feb. 10 , the WHO called the virus “a spark that becomes a bigger fire”. But world stocks still hit record highs on Feb 19.

On Feb. 24, as deaths mounted in South Korea, Italy, and Iran, European shares suffered their worst day since 2016. 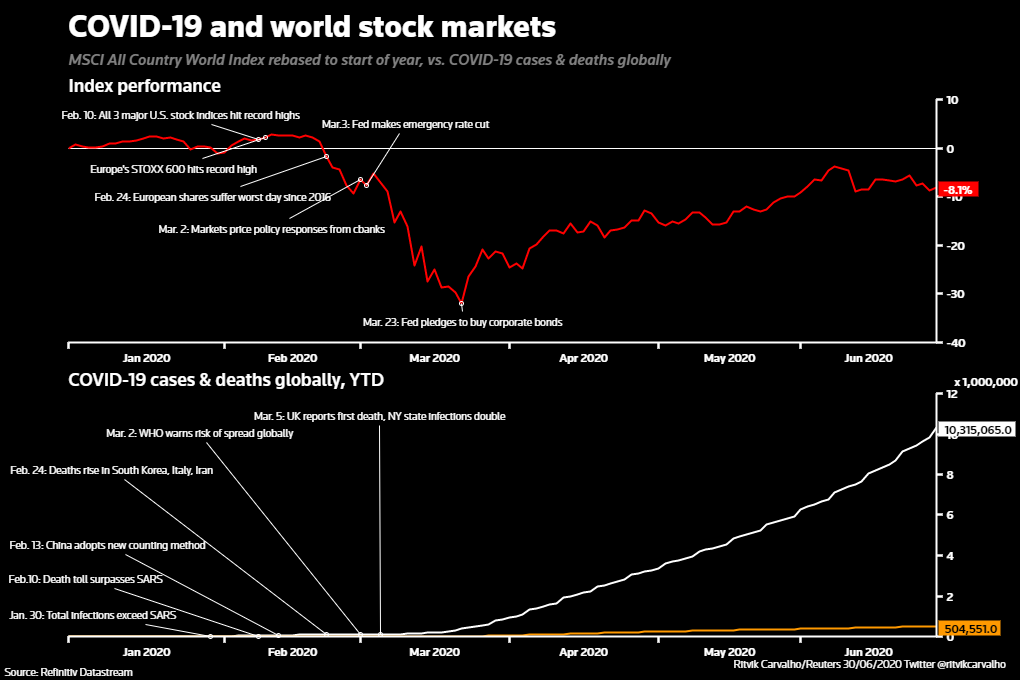 Market panic galvanised the Fed into an emergency interest rate hike on March 3. 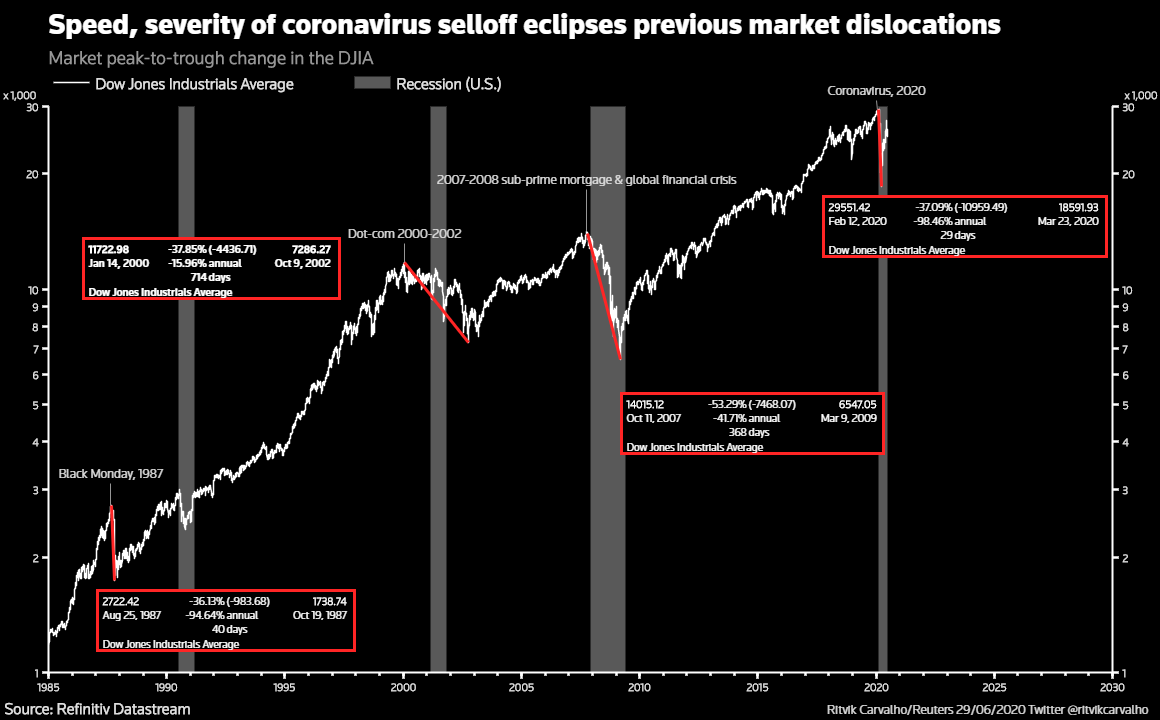 On March 11, the Bank of England slashed rates to 0.25%. The Fed went to 0% too in an unscheduled March 15 move, triggering more policy easings worldwide.

On March 23, the U.S. Federal Reserve pledged to buy corporate bonds, including select junk securities, for the first time ever. U.S. corporate yields tumbled 80 bps in a week and are now at record lows.

The crisis forced a U-turn on budget frugality, notably in Germany which on March 23 announced a spending package of up to 750 billion euros. Britain also reversed “austerity”, with 133 billion pounds in pledges.

The March meltdown fuelled a dash for dollars, blowing out swap premia for the greenback. Euro-dollar three-month swap spreads surged above 120 bps on March 17, the widest since 2011. Between March 9-20, the dollar jumped 9%. 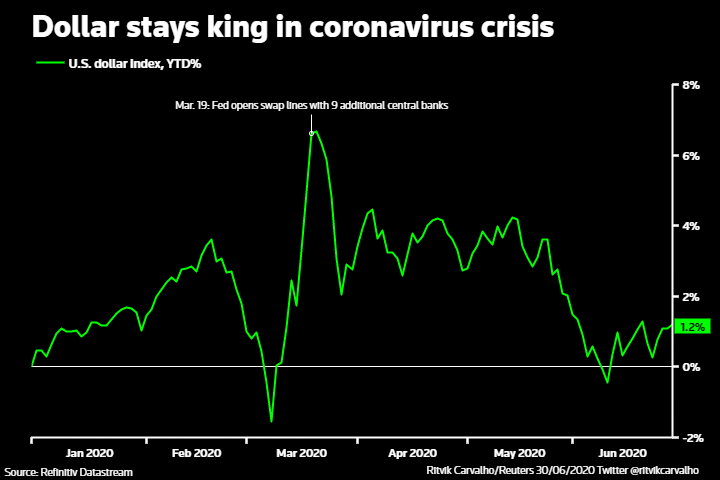 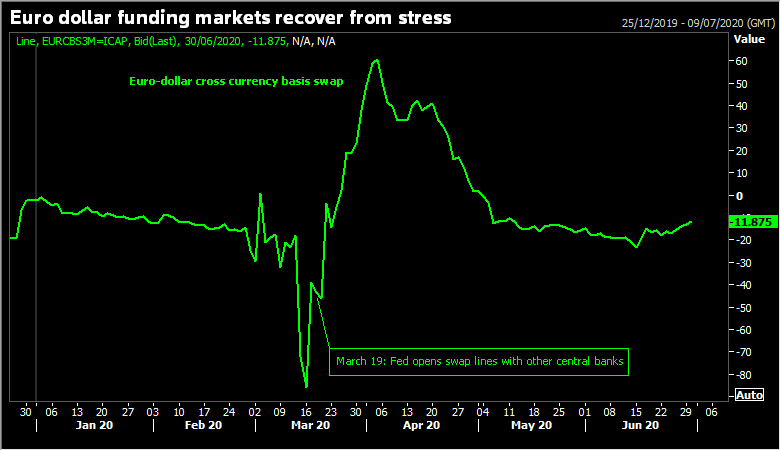 Some wealthy U.S. families approved for government loans amid pandemic

By Lawrence Delevingne BOSTON - Private investment firms that manage the fortunes of wealthy individuals and their kin were approved for millions of dollars in...
Read more
US News

Olympics must go ahead next year as symbol of overcoming COVID-19, Tokyo governor says

By Kate Duguid The Federal Reserve's $3 trillion bid to stave off an economic crisis in the wake of the coronavirus outbreak is fueling excesses...
Read more
US News

By Sarah N. Lynch WASHINGTON - The federal judge who presided over Roger Stone's criminal case ordered the government on Monday to explain the scope...
Read more

Mexico may accept medical kit in barter for presidential jet

By Steve Holland MIAMI - President Donald Trump is expected to raise $10 million on Friday during a high-dollar fundraiser hosted by the chief executive...
Read more