By David Randall and Saqib Iqbal Ahmed NEW YORK - Investors are girding their portfolios for market moves ahead of the U.S. presidential vote, as...
Read more
Money

Trump says ready to send out coronavirus aid, but Democrats holding it up

WASHINGTON - President Donald Trump in a series of Friday tweets announced the White House is preparing to provide relief for the economic pain...
Read more
Money

By Fransiska Nangoy and Bernadette Christina JAKARTA - Indonesian Sofa Arbiyanto had a manufacturing job in South Korea two years ago when he learned about...
Read more
Facebook
Linkedin
ReddIt
Twitter

HONG KONG – China’s national security law for Hong Kong and moves by the United States to begin withdrawing privileges enjoyed by the city under U.S. law have unsettled investors.

They have also raised fears about the stability of the Hong Kong dollar’s <HKD=D3> (HKD) 36-year old peg to its U.S. counterpart, prompting local officials to issue several reassurances.

HOW THE PEG WORKS

The HKD is pegged in a narrow range of 7.75-7.85 to the U.S. dollar. The Hong Kong Monetary Authority (HKMA) buys and sells the currency at either limit to maintain the range. Buying HKD boosts it by reducing its availability and raises the costs of betting against the currency. Sales do the opposite.

The HKMA has sold HK$106 billion ($13.68 billion) so far this year to keep a strengthening Hong Kong dollar within this range, according to Reuters’ calculations.

To maintain the peg, official Hong Kong interest rates track U.S. monetary policy. The currency’s movement within the band is influenced by differences between market interest rates in both. Hong Kong interbank rates <HIBOR=> are higher than their U.S. equivalents <LIBOR=>, helping keep the HKD strong in spite of concerns about outflows related to the new law. 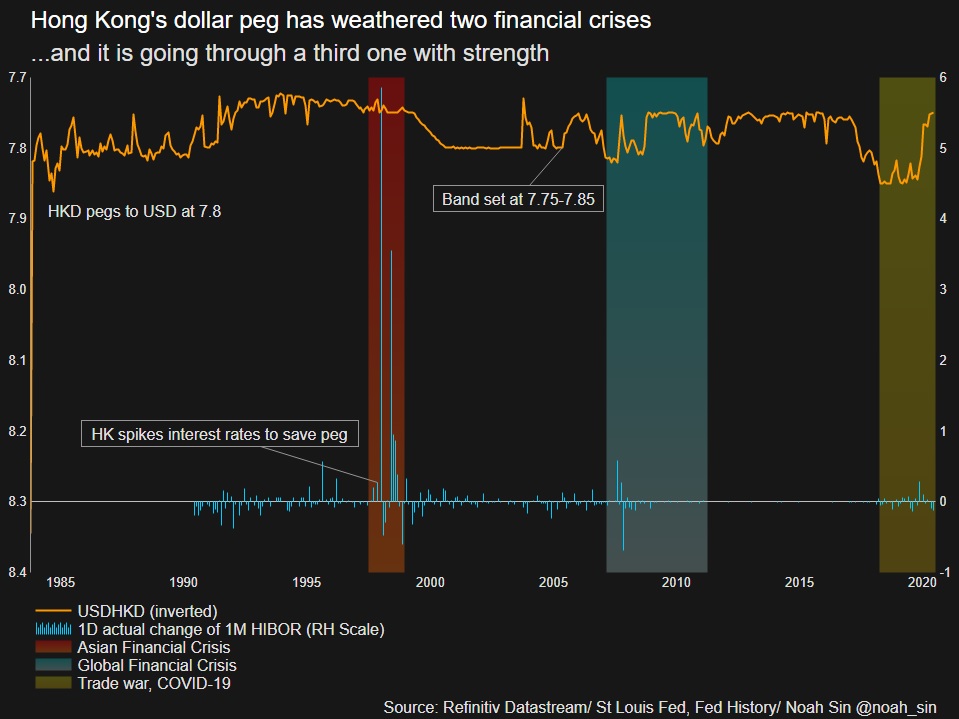 HOW VULNERABLE IS THE PEG?

There are fears that escalating U.S.-China tensions could result in the United States potentially limiting Hong Kong banks’ access to U.S. dollars, thus jeopardizing the peg.

A Bloomberg report suggested this week that U.S. President Donald Trump’s policy advisers explored that option, though the idea did not gain any traction.

Analysts say the White House cannot hurt the peg in Hong Kong, one of the world’s largest U.S. dollar trading centers, without also hampering the greenback’s hegemony as a global currency. Some call it a “nuclear option”.

“For the U.S. dollar, exorbitant privilege is not risk-free,” Geoff Yu, senior EMEA market strategist at BNY Mellon, said in a note. “The bottom line is that current rhetoric surrounding the Hong Kong dollar peg will likely stay as rhetoric.” 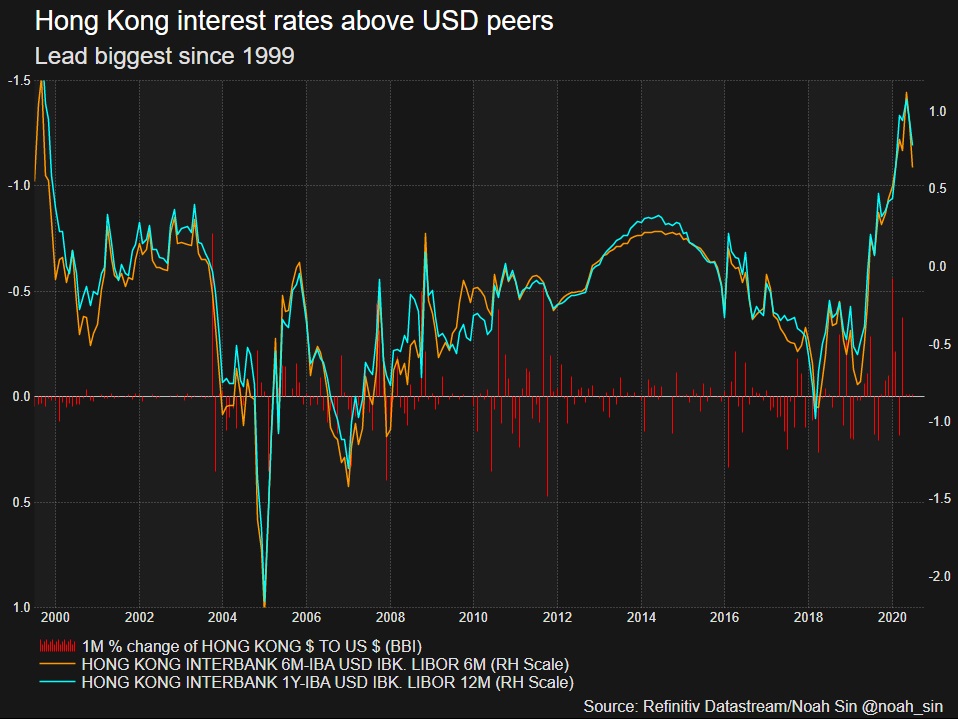 WHY THE HKD MATTERS

Hong Kong’s economy has shrunk in its importance relative to the mainland since the territory’s 1997 handover to China but its financial significance has grown. Any real threat to the peg risks undermining that.

With China maintaining tight capital controls, Hong Kong acts as a key financing conduit, hosting one of the largest stock markets in the world and acting as the biggest gateway for international investment in mainland stocks and bonds. It has also become one of the world’s biggest currency trading centers and ranks third globally for U.S. dollar trading.

China’s wealthy have put faith in the city too, with more than half of Hong Kong’s estimated private wealth of more than $1 trillion coming from mainland individuals. 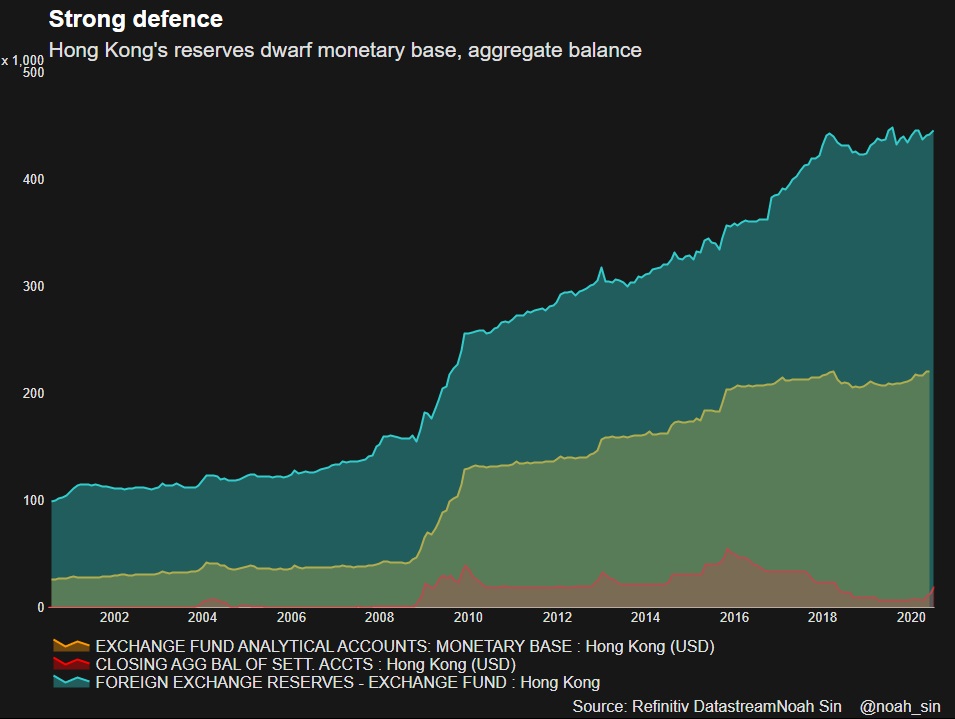 By Joey Roulette and Eric M. Johnson WASHINGTON/SEATTLE - The U.S. Justice Department has opened a criminal probe into whether NASA's former head of human...
Read more
US News

U.S. post office warns 46 states some mailed ballots may not be counted in election

WASHINGTON - The U.S. Postal Service recently sent letters to 46 states and the District of Columbia warning that some mailed ballots may not...
Read more
Money

By David Randall and Saqib Iqbal Ahmed NEW YORK - Investors are girding their portfolios for market moves ahead of the U.S. presidential vote, as...
Read more
Money

By Steve Holland WASHINGTON - President Donald Trump on Thursday managed to pull off a rare victory for U.S. diplomacy in the Middle East ahead...
Read more