U.S. Treasury Secretary Janet Yellen on Thursday threw her support behind a new allocation of the IMF's own currency, or Special Drawing Rights, but...
Read more
Money

Short-sellers are sitting on estimated profits of $3.5 billion from their bearish positions on Tesla shares in the past seven days, as of Feb...
Read more
Money

Venezuela ships jet fuel to Iran in exchange for gasoline

Venezuela is shipping jet fuel to Iran in return for vital gasoline imports for the South American nation as part of a swap deal...
Read more
Money

Stocks, bonds and commodities? Old hat. Once the preserve of the super-rich, or just the eccentric, all kinds of unusual investments from vintage handbags and...
Read more
Money

Powell schools Senators with his version of ‘Economy 101’

In a congressional hearing dominated by talk of the pandemic and what may be needed to heal the economy from its effects, Fed Chair...
Read more
Money

Show us the plan: Investors push companies to come clean on climate

In the past, shareholder votes on the environment were rare and easily brushed aside. Things could look different in the annual meeting season starting...
Read more
Money

Is the presumed proliferation of market bubbles just speculative froth among amateur traders or is concentrated institutional money blowing big soapy spheres that interconnect and may inevitably burst each other?

The two factors are certainly at play as savings balloon amid massive government and central bank support for confined populations during the pandemic.

Over-caffeinated day traders with whizzy new stock market apps and punting from bedrooms during lockdown get most blame for some of blinding single stock surges of the past six months.

But the buzz around some active themed funds in the mushrooming Exchange Traded Fund space is just as eye-catching and perhaps raises bigger questions about concentrated risk.

A ballooning of the ETF world since the last great crash is the first obvious point – as they were only bit players in the Great Financial Crisis of 2008. The number of ETFs captured by fund tracker Lipper has risen almost five-fold since 2009 to some 5,582 worldwide last year – with combined assets of almost $6 trillion compared with less than $900 billion 11 years ago.

And to the extent that ETFs have traditionally been passive index trackers, growth of the sector over those years has appeared pretty benign. Their attraction stems largely from their pitch as low-cost vehicles channeling savings and 401(k) pension money into broadly diversified portfolios and which only disrupt the pricier end of the active management business.

What’s more, long-standing fears of potential accidents with daily exchange sourcing and pricing of underlying assets and adequate cash balances during market stress have proven mostly unfounded to date during market wobbles of the past decade.

But as the years rolled on and virtually every index on the planet was shadowed by multiple ETFs, questions about new trading strategies and ideas were increasingly met with the response: “There’s an ETF for that”.

Far from simple and passive index trackers, a blizzard of themed and leveraged ETFs has emerged – charging higher fees for targeted outperformance or demanded by professional investors for hedging purposes.

A report by Citi this week shows thematic ETFs came into their own last year, with a $57 billion surge in flows bringing total assets to some $140 billion, and it reckoned this growth was “still in its early stages”.

And perhaps unsurprisingly, given the tech boom and ongoing lockdowns, it shows “disruptive innovators” and “clean energy” funds have driven the trend and that’s where the concentration of new inflows and assets lie.

For some analysts, the swelling of these types of funds goes a way to explaining recent outsize and sometimes correlated market moves hitting the headlines – and could cause serious headaches if just one part of them were to go into reverse. 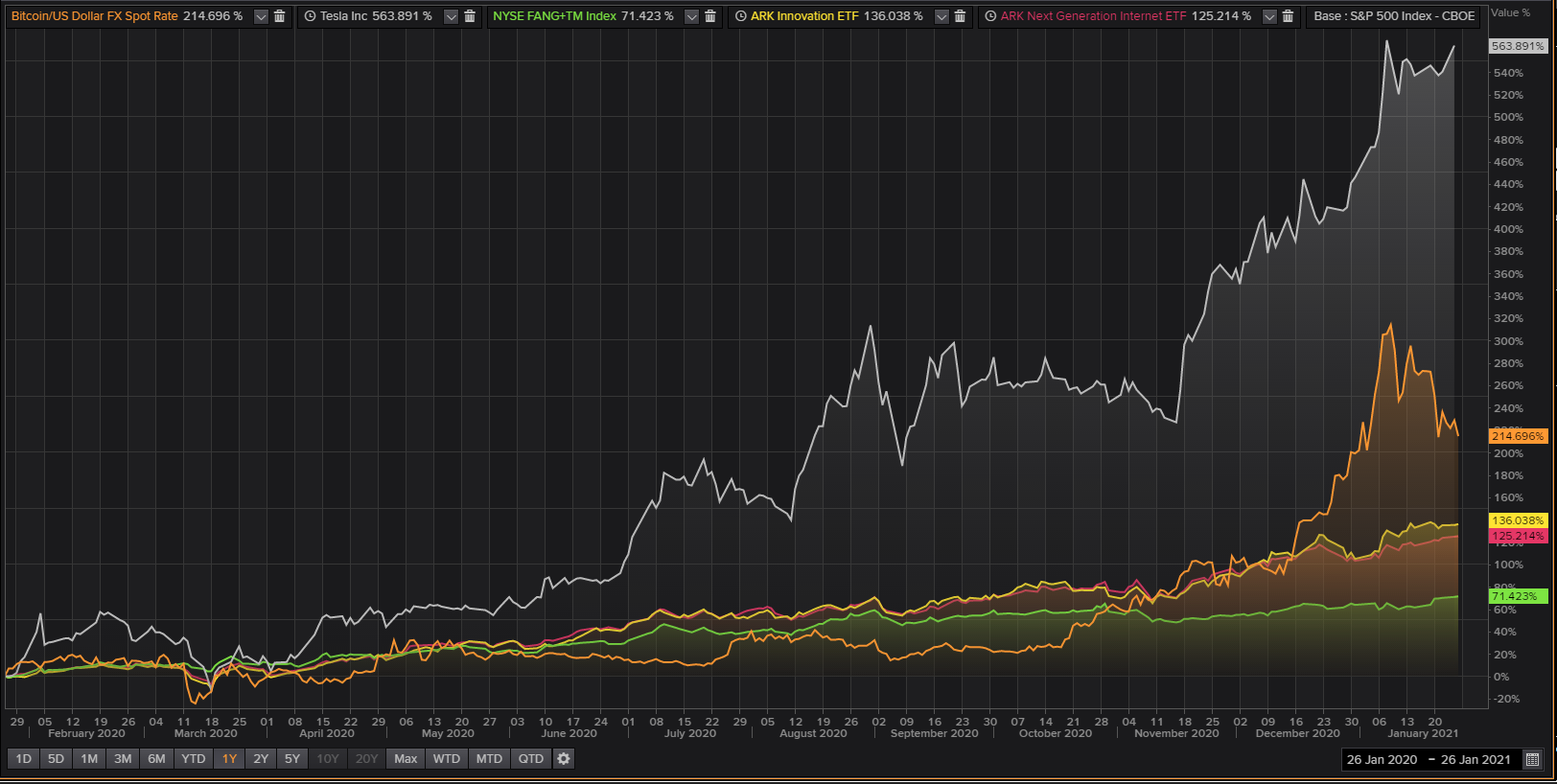 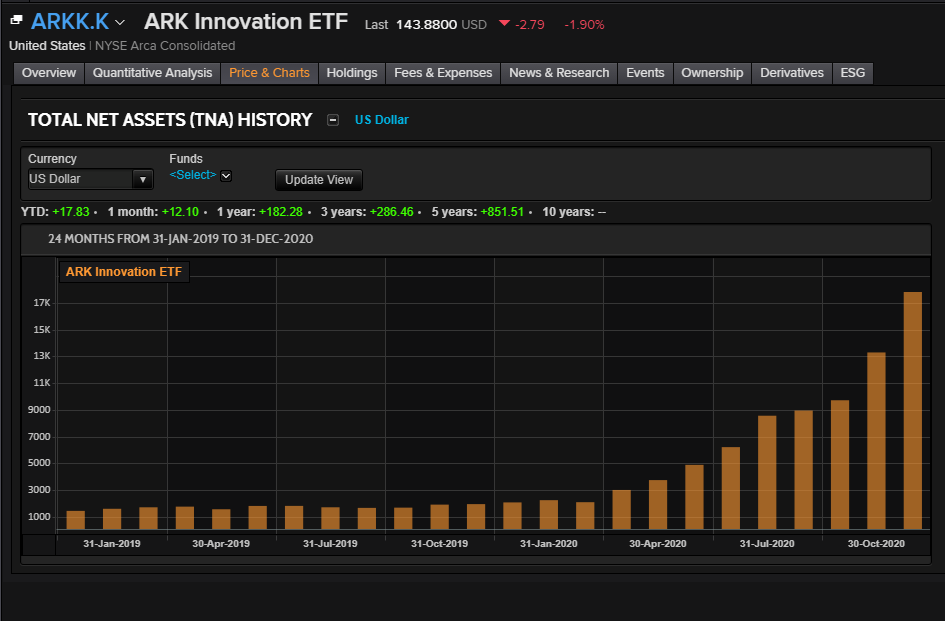 For example, four of the 10 best performing non-leveraged ETFs over the past year were themed funds managed by ARK Invest – with its flagship Ark Innovation and Ark Next Generation Internet generating year-on-year returns of between 750-850%. Assets under management have hit more than $24 billion and $6 billion respectively, compared with less that $2 billion and $500 million each just a year ago.

What’s in those funds is more interesting. Unlike many wider index trackers, they are concentrated in little over 50 stocks, with Tesla making up about 10% in each and the Next Generation Internet ETF also including crypto investor Grayscale Bitcoin Trust as its fifth largest holding alongside the likes of TV streaming firm Roku and online health firm Teladoc.

Citing a recent analysis in Barron’s magazine examining difficulties for open-ended ETFs like ARK’s hitting capacity limits in relatively illiquid stocks due to enormous inflows, Saxo Bank strategist Peter Garnry warned of spillovers in any sharp reversals in its holdings.

“We are basically putting out the warning this interconnectedness of positions could drive each other and become the epicenter of the next correction in growth equities,” he wrote. “Our thinking is that a sell-off in Bitcoin can cause risk adverse behaviour among investors with Tesla-Bitcoin-Ark positions and suddenly a vicious sell-off has started”.

Whether themed ETFs are prone to bunching relatively small stocks that have seen sharp price rises and these then attract waves of inflows looking to ape past performance that merely blow bubbles in the process is a question.

Citi notes this problem. “We are cognizant of a ‘which comes first’ dilemma, the theme or the underlying stock price action?”

And on that, recent studies aren’t kind.

An academic paper by Itzhak Ben-David, Francesco Franzoni, Byungwook Kim and Rabih Moussawi published by the National Bureau of Economic Research this week studied ETFs over the 20 years before the pandemic and concluded that what they call ‘specialized’ ETFs performed poorly.

“These ETFs tend to hold attention-grabbing and overvalued stocks and therefore underperform significantly. They deliver a negative alpha of about −4% a year,” it said, adding that under-performance persists for at least five years following launch – usually the peak of excitement around the investment theme.

Perhaps it’s different since the pandemic.

(The author is editor-at-large for finance and markets at Reuters News. Any views expressed here are his own)

Lady Gaga offers $500,000 for the return of her two dogs that were stolen

Don't Be Censored, Get our Newsletter